Cuts to the U.S. weather satellite program could have a direct impact on the reinsurance and catastrophe modelling industry, according to a study released prior to a proposal by the Trump Administration to gut the program’s budget.

“While difficult to quantify its direct value to the sector, [National Centers for Environmental Information] NCEI’s data is the backbone for many transactions in the reinsurance industry and without it billions of dollars of economic activity would be lost,” said a report in December by the National Oceanic and Atmospheric Administration (NOAA).

The report was issued three months prior to Friday’s article by the Washington Post that stated the Trump Administration was planning on cutting the NOAA’s budget by 17 percent. The report states that largest single cut to the NOAA’s budget would come from the National Environmental Satellite, Data and Information Service, which includes NCEI.

Later reports pegged the satellite division cut in particular at 22 percent, or $513 million. 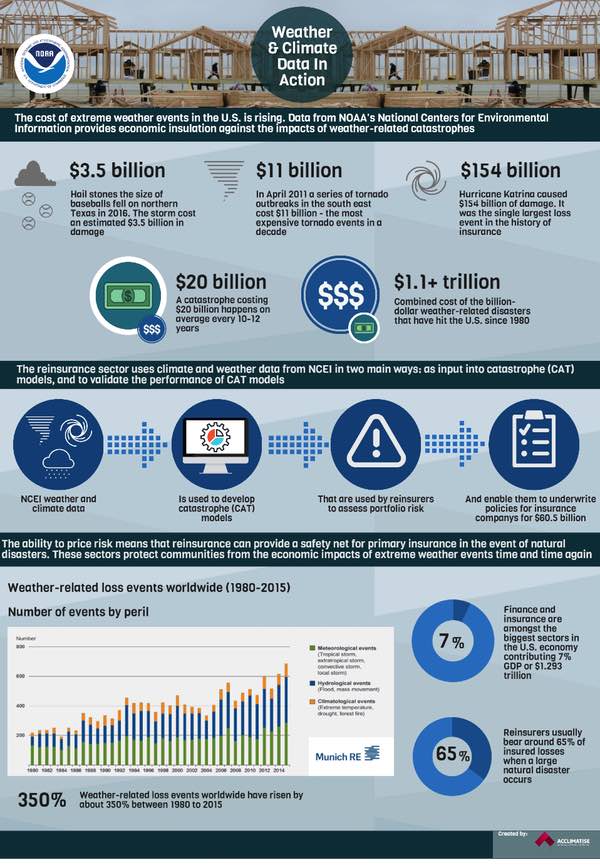 In particular, the NOAA cits access to its data in order for the industry to provide input and validity to their existing catastrophe models and to review and justify claims.

The report lists industry examples, such as:

[The] reinsurance sector is a substantial user of NCEI’s hurricane track data (IBTrACS), severe weather data (SWDI), station data for temperature and precipitation (GHCN-D) the Billion Dollar Disasters Report and Storm Events Database,” the report states. “The maintenance of existing products, and provision of new data products is of critical importance to the sector, and this study has likely underestimated its value.”

Disasters Are "Not Very" Bad for Banks Paid Members Public

Developing nations sell citizenship to fund catastrophe cover and the the NFIP flood policy has solid models and a big price tag.